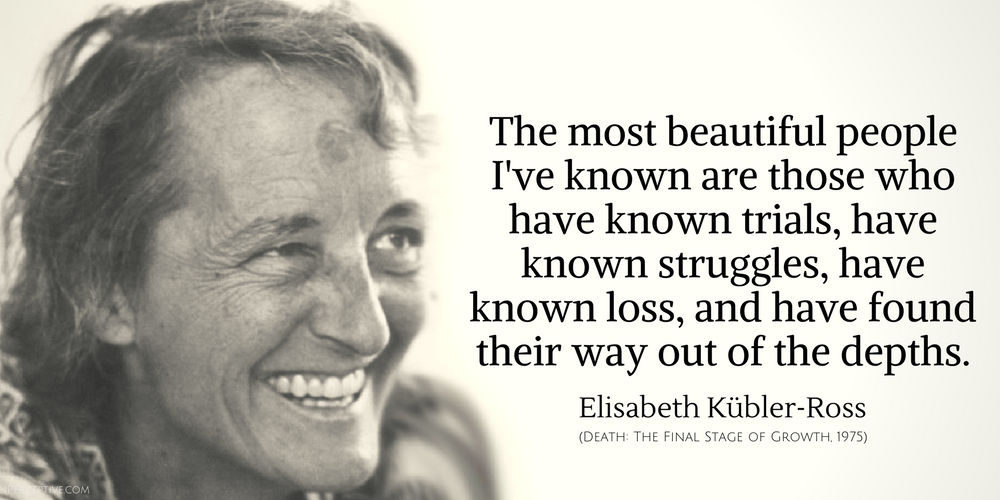 The greatest modern pioneer in opening up the subject of life after death for Western culture as a whole was Dr. Elisabeth Kübler-Ross. Like the stunning impact of Rachel Carson’s book Silent Spring in 1962, which opened our awareness to ecological concerns, the publication of her book On Death and Dying in 1969 tore away the opaque veil that had shrouded the subject of death. Almost single-handedly, assisted by her strong personality as well as her extensive clinical experience as a doctor and psychiatrist, she broke the taboo on the subject of death and transformed attitudes towards death and the care of the dying. Her later books, particularly On Life After Death (1991), kept the subject before the eyes of the public and, thanks to the rapid dissemination of her ideas through the media as well as many workshops in different countries, led to many thousands, if not millions, having a greater trust in their own and their loved ones’ survival after death. Her writing also led for a time to far better care of the dying and respect for their needs — with many hospices for the dying being established.

Increasingly fascinated by this subject, she and her team studied the records of the case-histories of over twenty thousand people from all over the world and from every cultural and social background who had had an NDE and returned to life after being declared clinically dead. Some had returned to life naturally and some through the rapidly developing skills of medical resuscitation. She compared the death of the physical body to the shedding of a worn-out casing or cocoon, releasing the “butterfly” of the soul into life in another dimension.

Increasingly fascinated by this subject, she and her team studied the records of the case-histories of over twenty thousand people from all over the world and from every cultural and social background who had had an NDE and returned to life after being declared clinically dead. Some had returned to life naturally and some through the rapidly developing skills of medical resuscitation. She compared the death of the physical body to the shedding of a worn-out casing or cocoon, releasing the “butterfly” of the soul into life in another dimension.

It seemed to her that it was nothing short of a tragedy that so many millions of us are not aware of this. She realized that, after her many years of work as a psychiatrist with schizophrenic patients, and many more years of work caring for the dying, she needed most of all to communicate to people the fact that death was not the end of consciousness. “The dying experience is almost identical to the experience at birth. It is birth into a different existence which can be proven quite simply.

For thousands of years you were made to “believe” in the things concerning the beyond. But for me it is no longer a matter of belief, but rather a matter of knowing.” Through the many years of her work, she, like others who followed her, was able precisely to define what happens as we move from this dimension into another.

A person may become aware that he or she is leaving the body, floating above it and with the unfamiliar ability to move around in the room and look down on the body, often from the ceiling.

As soon as your soul leaves the body, you will immediately realize that you can perceive everything that is happening at the place of dying, be it in a hospital room, at the site of an accident or wherever you left your body. You do not register these events with your earthly consciousness, but rather with a new awareness, even during the time your body has no blood pressure, no pulse, no breathing, and in some cases, no measurable brain waves.

She found that people gave clear descriptions of what they saw happening to them during surgery, or cardiac resuscitation, or when being cut free from a car after an accident, even to such details as the license plate on the car that hit them. They could hear the words of the doctors and nurses working on their shattered bodies and could repeat these later to the astonished and often sceptical helpers. A special study of blind people that she conducted showed that they were able to see and remember the colours, jewellery, clothes and even the patterns on the clothes of the people engaged in resuscitating them.

In the second stage of the NDE, the ‘dead’ person who previously had been seriously injured, or perhaps blind or deaf in their earthly life, realizes that they are restored to perfect wholeness and health. Those formerly blind and deaf reported that during their NDE, they could see and hear. Even patients who had multiple sclerosis and were confined to a wheel-chair reported that during their NDE they were able to move again, even to dance and sing. A person might be fully aware that he or she had lost a limb in an accident, but in the NDE he or she sees that limb rejoined to the body. This experience would seem to reflect the words in The Tibetan Book of the Dead,

Even though you may have been blind, deaf or lame while you were alive, now your eyes see forms, your ears hear sounds and all your sense faculties are faultless, clear and complete.

Soygal Rinpoche – The Tibetan Book of the Dead

While the Tibetan words refer to the person who has just died rather than to one who is undergoing a near-death experience, the similarity between them is striking.
Kübler-Ross found that children who were close to death moved in and out of an NDE state as the time of their death drew nearer. They said that a grandparent or other close relative on the other side had come to be with them and help them with the transition.
As her work gathering the thousands of experiences of NDE’s developed, she found that no-one who had one of these experiences was any longer afraid of dying.

Since the care of dying children was her special concern, she sat with many who had been brought to hospital after car accidents. She found that as she sat watching for the signs of serenity immediately preceding death, a child might say that everything was all right and that their loved ones were waiting for them. In one example she shared, a child told her that her mother and brother were waiting for her—even though no one had told her that her mother and brother had been killed in the same accident.

a stranger shortly after a hit-and-run accident, asking him as she passed to give a message to her mother that she was happy because she was with her dad. The stranger was so moved by this experience that he drove seven hundred miles to see the woman’s mother on an Indian reservation. There he was told that her husband, father of the victim, had died of a coronary one hour before his daughter’s accident.

The third stage of the NDE — which can sometimes anticipate the awareness of the physical body being separate from the observing consciousness — is the experience of moving very rapidly through a tunnel or cylinder-like funnel, often accompanied by a loud roaring noise as of a rushing wind, avalanche or waterfall.

This is the experience that I myself had when I was eleven and I remember the loud roaring noise and the tunnel as being terrifying because I didn’t know what was happening to me. If I had known then what I know now, it would have greatly diminished my fear. As they move through the tunnel (not everyone experiences an accompanying noise), many people describe seeing a light at the end of it which grows brighter as they advance through the tunnel until they find themselves bathed in its indescribably brilliant radiance. In 1480, the artist Hieronymous Bosch painted this exact scene as part of a larger painting, showing the deceased person being accompanied by an angel as he entered the tunnel and another being waiting for him at the far end of it.

Near the end of her book On Life After Death, Dr. Kübler-Ross describes her own experience of the light and love of the divine ground:

It started with a very fast vibration, or pulsation, of my abdominal area which spread through my entire body and then to anything that my eyes could see — the ceiling, the wall, the floor, the furniture, the bed, the window, the horizons outside of my window, the trees, and eventually the whole planet earth. It was as if the whole planet was in a very high speed vibration, every molecule vibrated. At the same time, something that looked like a lotus flower bud appeared and opened into an incredible, beautiful, colorful flower. Behind the lotus flower appeared the light that my patients so often talk about. And as I approached this light through the open lotus flower, with a whirl in a deep, fast vibration, I gradually and slowly merged into this incredible unconditional love, into this light. I became one with it.

Unconditional love often accompanies an NDE and she describes how, soon afterwards, as she went out of her house, she experienced “the greatest ecstasy of existence that human beings can ever experience on this physical plane. I was in total love and awe of all life around me. I was in love with every leaf, every cloud, every piece of grass, every living creature.” There was, she says, “no questioning the validity of this experience, it was simply an awareness of a cosmic consciousness of life in every living thing, and of a love that can never ever be described in words.”

Elisabeth Kübler-Ross laid the foundation for a new approach to the experience of dying, one that is based on trust instead of fear and presents the invisible dimension of the cosmos as loving and caring of those who are about to leave this dimension. There is a gentleness, a true feminine compassion, an empathy in her books that is something new. There is also the fierce passionate strength needed to bring her vision through into a culture which denies death and treats old people in retirement homes and people dying in hospital with shocking indifference, even outright cruelty and contempt.

Traditionally women have been the ones who care for the dying just as they care for the new-born. However, in the past, all the pronouncements on the nature of death and the survival of the soul from whatever religious tradition have been formulated by men. Here, suddenly, is a woman’s perspective on death, a woman’s experience of the dying and trust in the survival of the soul.

On the next to last page of Death, the Final Stage of Growth, she concludes, through her experience of working with the dying for many years, that “Death is the final stage of growth in life. Only the body dies. The self or spirit or whatever you may wish to label it, is eternal.”