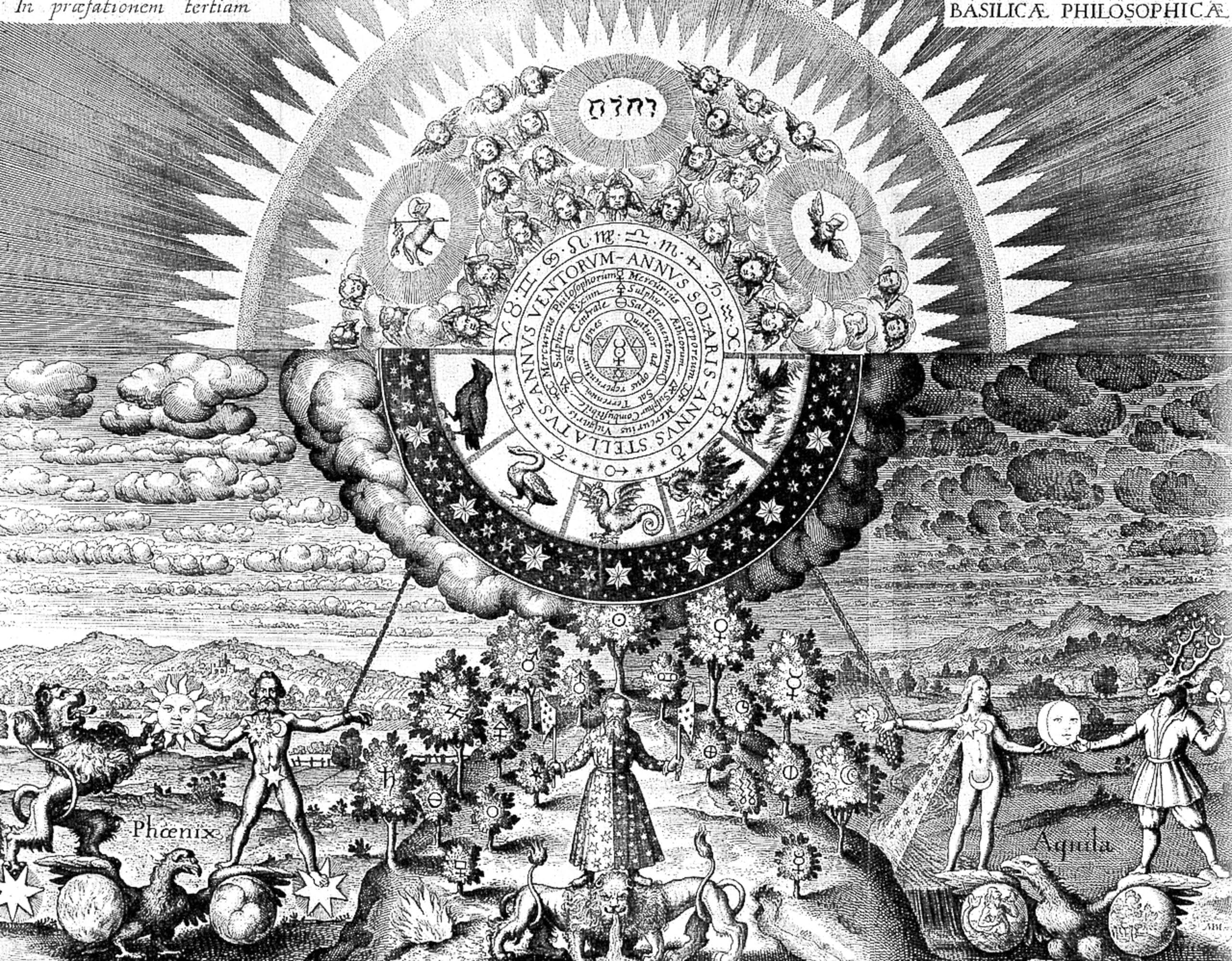 The Great Work of Alchemy

The Process of the Soul’s Transmutation

Alchemy flows beneath the surface of Western civilization like a river of gold, preserving its images and its insights for us so that we could one day understand our presence on this planet better than we do. Alchemy builds a rainbow bridge between the human and the divine, the seen and unseen dimensions of reality, between matter and spirit. The cosmos spirit.

To all of us falls one heritage – Wisdom. All of us inherit of it equally. But one man makes the best of his heritage, and another does not; one buries it, lets it die, and passes over it; another draws profit from it — one more, one less. According to how we invest, use, and administer our heritage, we obtain much or little from it; and yet it belongs to all of us, and it is in all of us

The cosmos calls to us to become aware that we participate in its life, that everything is sacred and connected—one life, one spirit. Alchemy responds to that call.

It asks us to develop cosmic consciousness, to awaken the divine spark of our consciousness and reunite it with the invisible soul of the cosmos. It changes our perception of reality and answers the questions: “who are we and why are we here?”

The Roots of Alchemy

Alchemy is at least 4000 years old and has deep roots in Egyptian, Babylonian and Greek, as well as Chinese, Indian and Persian civilizations. Some scholars think that the word alchemy comes from an Arabic word meaning “the preparation of silver and gold”. Others that it means “black earth”. The word ‘alchemy’, because it contains the prefix ‘al’, suggests an Arab derivation, but the word ‘chemeia’ points to a connection with the Egyptian word ‘Khem’ which was a word used to describe Egypt, whose black earth was created by the annual inundations of the Nile. The great obelisks which stood gleaming in the courtyards of the Egyptian temples were once covered with electrum which was an alloy of silver and gold. But certain Egyptians knew how to apply this science to the soul; they discovered how to make an alloy of its two basic elements – the solar gold of the masculine element and the lunar silver of the feminine one.

There have been men and women in every culture — in Egypt and Babylonia, in Persia, Tibet, India and China, in mountains and forests remote from the centres of civilization — who have transmitted their knowledge of ways of relating to the dimension of spirit, ancient ways that until recently were the closely guarded secret of a handful of initiates.

The work of alchemists in different cultures laid the foundations of modern science: chemistry, biology, physics on the one hand, and psychology on the other. They also developed the knowledge of how to distil the essence of plants for the purposes of healing – leading to the science of Homeopathy and Herbal Medicine. Much precious knowledge transmitted from earlier shamanic cultures was lost because so many transmitters of this knowledge were murdered by the religious fanaticism that has so regrettably prolonged the suffering of humanity.

In Europe, alchemy had its great age of flowering in the sixteenth and seventeenth centuries although there were well-known alchemists in earlier times and other places. Just as the city of Prague was the centre of European alchemy in the sixteenth and seventeenth centuries, so the thriving city of Alexandria was the centre of alchemy in Hellenistic times. Recently discovered manuscripts (Zosimus of Panopolis 3rd century AD) show that from earliest times alchemy was understood as the art of soul transmutation, not the literal transmutation of metals into gold. Hence the alchemical saying: “Our gold is not the common gold”.

The Origin of Alchemy

The origin of alchemy lies in the shamanic traditions of the lunar cultures which kept alive the vital connection between the visible and invisible worlds. There has always been a chain of teachers (known as the Golden Chain or Catena Aurea) who have transmitted this knowledge from generation to generation over thousands of years. Two great streams of alchemical knowledge, one flowing from ancient Egypt and Babylonia with their highly advanced knowledge of astronomy and mathematics, and the other from Arabia and Islamic Spain, came together in Europe in the late Middle Ages and Renaissance. There were some 4000 alchemists working in Europe between 1200 and 1650 and they created dozens of extraordinary and, in some cases, very beautiful alchemical texts. Alchemy, like Kabbalah, was a visionary and contemplative tradition handed down from teacher to pupil and, indeed, many alchemists were kabbalists and vice-versa.

In attempting to understand alchemy, it is helpful to have some knowledge of Kabbalah. All were astrologers, for the Great Work required the knowledge of the alignment of the alchemical processes and the physical elements undergoing transmutation with the position and relationship of certain planets. Among the most famous Egyptian alchemists were the mythical figure of Hermes Trismegistus and Marie Prophetessa, a Jewess of Alexandria, from whose name comes the bain-marie or pan of water which, even today, is used by chefs to heat dishes gently in the oven or to keep them warm. Later, in Europe, there were great Jewish and as well as Christian alchemists, among them the brilliant and controversial physician Paracelsus. We owe them an immense debt of gratitude and it is helpful to invoke their presence and ask them for assistance in understanding their writings. Here are the names of some of the alchemists who were part of this Golden Chain:

We also owe a debt of gratitude to Jung, a modern alchemist for, without his rediscovery of alchemy, much that he discovered might have remained unknown to the general public. Jung came to study alchemy through two dreams recounted in his autobiography, Memories, Dreams, Reflections. These prompted him to collect many books on alchemy and to make an inventory of all the images and descriptions in them. Through his understanding of alchemy it could be said that he reconnected solar with lunar consciousness and the left hemisphere of the brain with the right hemisphere.

He recovered the ancient shamanic way of knowing of the lunar era that the alchemists had managed to keep alive through centuries of persecution. He realized that the images of alchemy were similar to those in the dreams of his patients and that they described a process of inner psychic transformation which he named the individuation process. Where Christianity taught that the Redeemer is outside us and that our redemption (as Christians) has been assured by Christ’s sacrificial death, Jung realized that the secret science of alchemy taught that the alchemist can become the redeemer of the lost aspect of spirit hidden within himself and nature, working with spirit to accomplish this redemption. Alchemy gives great importance and significance to the individual since the divine drama of redemption is consummated in and through us, not accomplished on our behalf.

It is an awesome and heroic task. Each one of us carries the mystery of the incarnation of spirit in this physical dimension of reality. Each of us can learn to become aware of it and to serve it. In the rich library of alchemical images, we are looking at spirit’s manifestation and transformation of itself as well as its desire for recognition and communication with us. Our human consciousness, our soul, is the vessel in which this mysterious transformation takes place. That is why Jung recognized that alchemy is a sacred rite, an opus divinum.

From the alchemist Gerhard Dorn, Jung took the idea of the unus mundus, the unifying cosmic ground in which both matter and psyche participate and whose connecting substratum gives rise to synchronicities as well as to miraculous healings, visionary experiences and sudden illuminations. He said that alchemy had two aims: the rescue of the human soul and the salvation of the cosmos. His last and most profound book on the alchemical Great Work is Mysterium Coniunctionis. After he had finished the first draft, he had an accident, followed by a serious illness and, feeling himself to be on the threshold of death, had the great visions of the coniunctio which he describes in his autobiography, Memories, Dreams, Reflections.