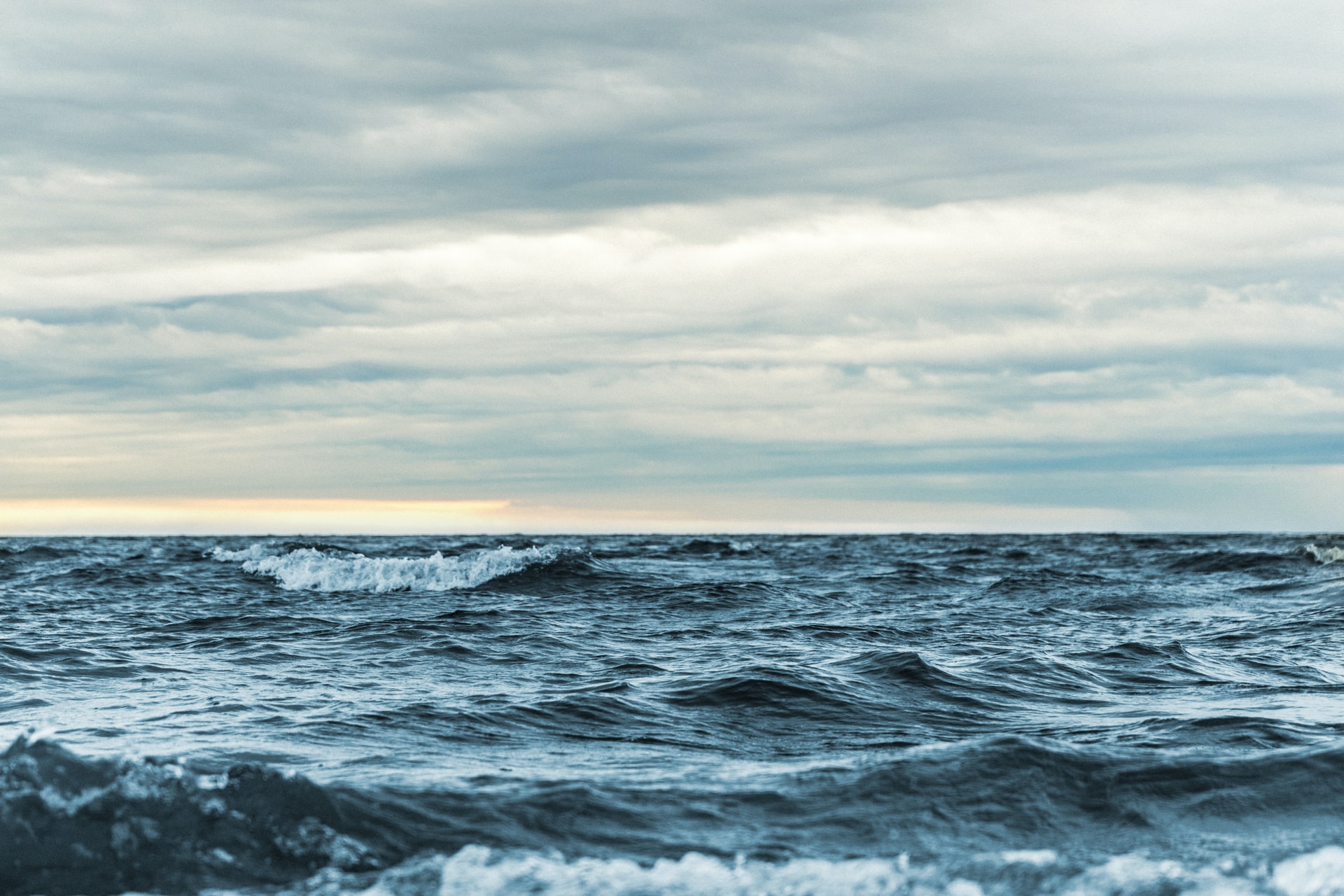 Soul as the Fathomless Sea of Being

From my dreams and from Jung’s invaluable discoveries I know that the sea is one of the primary images of the Soul—that mysterious sea so difficult to find, so incomprehensible to the mind conditioned to believe that there is only material reality. Perhaps that is why the I Ching, or Chinese Book of Oracles, enjoins us to “cross the Great Waters”. No-one has ever referred to the sea as ‘he’. The sea has always been associated with the feminine principle and with the image of a goddess — with Kwan Yin in China and the Virgin Mary in the Christian West and long before these with Nammu, the Sumerian goddess of the primordial abyss. For millennia sailors invoked their protection when they set out in their frail vessels across the dark immensity of the sea. But transpose the image of the sea to the measureless sea of Cosmic Soul.

Imagine that we could see through the physical forms, including our own bodies which we experience as opaque and solid, and were able to see myriad patterns of energy interacting with each other and connecting us with the subtle worlds of the Soul. Imagine shining filaments of light (invisible to us) flowing through the starry galaxies of space as well as through our bodies and the forms of the animals, plants, trees and the landscape we see around us.

How did we ever come to believe that the universe and matter are inanimate and dead? This cosmic web of life is an inconceivably complex, multi-levelled network of dimensions nested within dimensions, with information continually being exchanged between these dimensions — perhaps comparable to the way we now exchange information through websites and e-mails — at the molecular level, at the level of our own telepathic communication with each other, at the level of planetary life, and at the level of galaxies and perhaps any number of parallel universes of which, as yet, we know nothing.

We participate as creators in the unfolding of our own lives in this fathomless unfolding evolutionary process but the potential for limitless creation is also there and we participate in that ongoing process of creation. We may inhabit one of these worlds or dimensions after our death when we no longer need a physical body.

What we call our consciousness is infinite, yet paradoxically as small as the lens through which we try to fathom that immeasurable greatness.

If we were to ask ourselves the question put long ago by the great Indian sage Sri Ramana — “Who am I?” — the answer would be “I am the Soul of the Cosmos discovering itself through its own creation.”

In our modern culture, we are usually so completely absorbed in what the Taoists called the “ten thousand things” that it may never occur to us that the longing we may experience to set out on journeys, to sail across seas or explore foreign lands might reflect the Soul’s own longing to be explored, to reveal to us in the words of an Old Testament prophet “the treasures of darkness and the hidden riches of secret places” (Isaiah 45:3).

The Legacy of Plato and Plotinus

Returning to the Western tradition, no description of the cosmic dimension of Soul can disregard the immensely influential legacy of two of the greatest philosophers of the Greek world: Plato (429–347 BC) and Plotinus (205–270 AD), a philosopher who was born in Hellenistic Egypt and later moved to Rome, where he had a wide circle of students. We are fortunate that one of his students, Porphyry, edited the huge body of his teachings known as the Enneads that formed the basis of what came to be known as Neoplatonism. Through the influence of Plato and Plotinus the idea of a Cosmic Soul and a World-Soul was transmitted down the centuries by individuals who valued the Platonic ideas and their insights, and is coming to life again today. Their enduring influence is manifest in the words of the Sufi Sheik, Llewellyn Vaughan-Lee in his book, The Return of the Feminine and the World Soul, The World Soul is not just a psychological or philosophical concept. It is a living spiritual substance within us and around us. Just as the individual soul pervades the whole human being — our body, thoughts, and feelings — the nature of the World Soul is that it is present within everything. It pervades all of creation and is a unifying principle within the world.”

Plotinus, who developed and clarified Plato’s cosmology, said that we were within a reality that is also within us. “All things depend on each other; Everything breathes together”. His concept of the totally transcendent One as the divine ground of being, emanating through the levels and dimensions of cosmic life in the way the sun radiates light, until the world of matter comes into being, is remarkably similar to the cosmology of Kabbalah. As in that tradition, the individual human soul is the expression or emanation of the divine ground of the Cosmic or World-Soul and carries divinity within its nature.

In the twelfth century, the works of Plato became accessible in France through the translations of Arab philosophers living in Spain and gave rise to the marvel of the Gothic Cathedrals. Soul comes to life in the medieval quest for the Holy Grail—image of the boundless realm of the eternal pouring forth its light and love for the nourishment of humanity. Later, in fifteenth century Italy, with the translation of the works of Plato by the Florentine philosopher Marsilio Ficino, the idea of a Cosmic or World-Soul and the quintessential divinity of man was revived. Within a small but influential circle of individuals, nature was again perceived as ensouled and this released a tremendous creative energy in one small part of Europe. Yet these ideas could not take root and flourish. The young Pico della Mirandola gave his great Oration on the Dignity of Man but died before he could accomplish the dream he shared with Marsilio Ficino of bringing together the teaching of Kabbalah with that of Christianity. A little over a century later, Giordano Bruno, one of the most innovative and creative philosophers of his time, was sent to the stake in Rome in 1600 for declaring that nature was ensouled, that the World Soul illumined the universe and that there were other solar systems inhabited by living beings.

Even in the midst of the turbulence of the seventeenth century, the presence of Soul as the unseen ground of this material world still shines through the words of the visionary poet, Thomas Traherne (1637–1674) in his Centuries of Meditations: “The world is a mirror of infinite beauty, yet no man sees it. It is a Temple of majesty, yet no man regards it. It is a region of Light and Peace, did not men disquiet it. It is the Paradise of God.”

The corn was orient and immortal wheat, which never should be reaped, nor was ever sown. I thought it had stood from everlasting to everlasting. The dust and stones of the street were as precious as gold. The gates were at first the end of the world, the green trees when I saw them first through one of the gates transported and ravished me; their sweetness and unusual beauty made my heart to leap, and almost mad with ecstasy, they were such strange and wonderful things.

You will never enjoy the World aright, till the sea itself floweth in your Veins, till you are Clothed with the Heavens, and Crowned with the Stars and perceive yourself to be the Sole Heir of the whole World: and more… because Men are in it who are every one Sole Heirs, as well as you… Till your Spirit fills the whole World, and the Stars are your jewels.

After the turmoil and slaughter of the religious wars of the seventeenth century, Soul comes to life again in the work of the great poets of the Romantic Movement: Wordsworth, Keats, Shelley, Coleridge, and later, Tennyson, Goethe and the German poets of the nineteenth century, who reconnected their culture to nature and the imagination. Blake could see that “Everything that lives is Holy”. But their vision fades before the tremendous social, economic and technological changes wrought by the Industrial and Scientific Revolutions.

Earlier chapters have explored the difference between lunar and solar culture and shown how the perception of the cosmos as a living being was lost during the solar era, and how our conscious self-aware rational mind gradually became dissociated from the deeper instinctive ground out of which it had developed. They have shown how, through the great meta-narrative of the Fall of Man, nature and this world became desacralized and woman and all that was related to the Feminine deeply wounded because of their association with nature—a nature that was split off from spirit and seen as part of a fallen world.
From the fourth century, the powerful influence of St. Augustine and his profoundly pessimistic Doctrine of Original Sin severed humanity from the ground of Soul by imposing on the Christian community the belief that this world was fundamentally flawed and man contaminated by sin and separated from God—from which state only those who were predestined would be rescued by the grace of God. Although there were many other factors contributing to the loss of the wider concept of Soul, for many centuries this Christian doctrine drastically undermined the older lunar participatory experience of life and, in my view, led ultimately to the current philosophy of scientific reductionism and the loneliness and alienation of man in an apparently inanimate and indifferent universe.