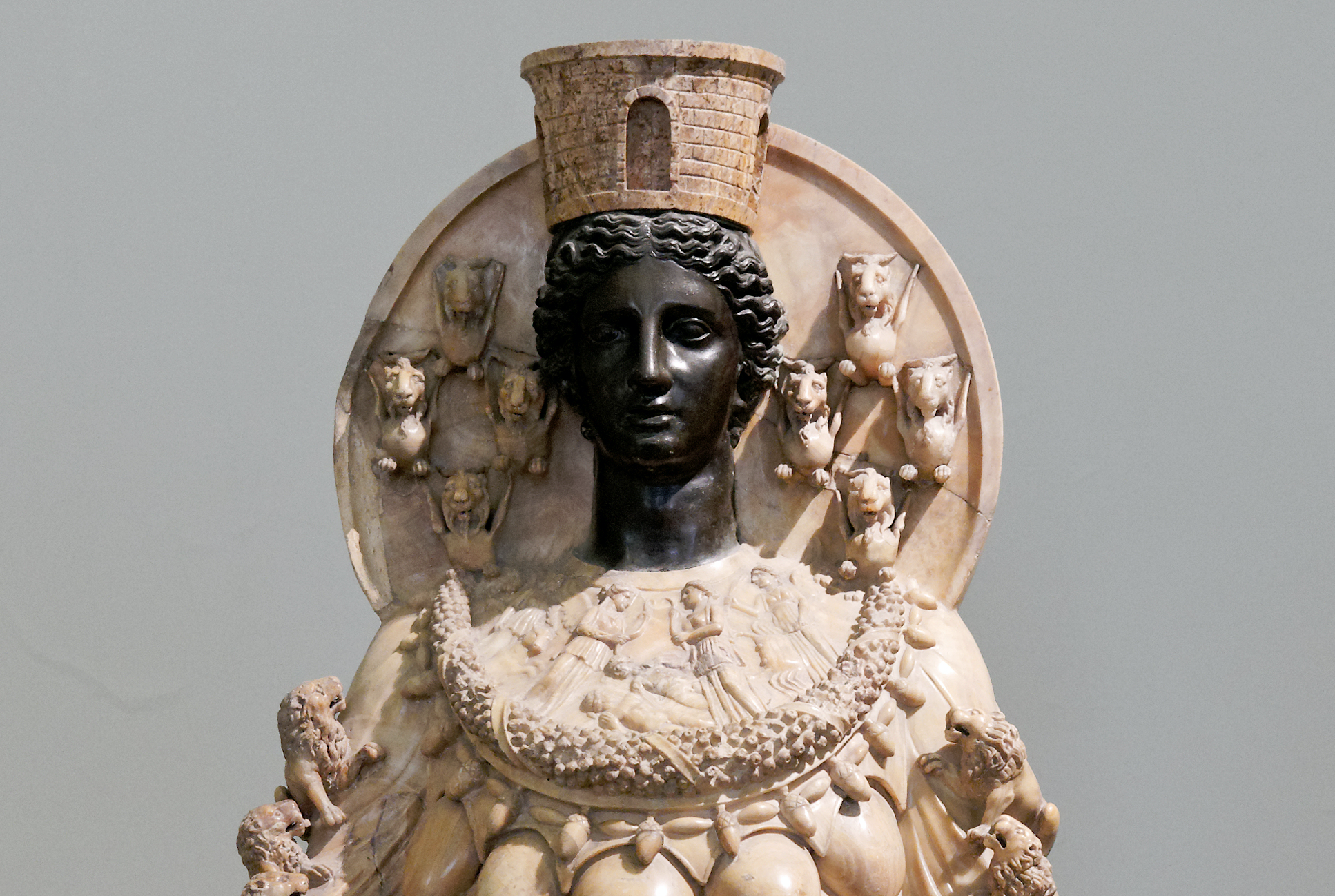 The Dream of the Cosmos, extract from Chapter 4

As the conscious mind began to differentiate itself from the matrix of nature, the sacred image was like an umbilical cord connecting us to the deep ground of life. For some 25,000 years, possibly far longer, the image of the Great Mother presided over distant eras which have only recently become accessible to us: the Palaeolithic, the Neolithic and the great civilizations of the Bronze Age. The earliest images of the Great Mother known to us are the small and in some cases, exquisite figurines of a goddess carved from stone and bone and ivory some 25,000 years ago (goddesses of Lespugue, Laussel, Willendorf).

The Goddess in all her manifestations was the symbol of the unity of all life in Nature… Hence the holistic and mythopoeic perception of the sacredness and mystery of all there is on Earth.”

– Marija Gimbutas, The Language of the Goddess

Long ago, and in many different cultures, the whole cosmos was envisioned as a maternal being and this world was seen as the manifestation of an unseen source which breathed it into being, animating and sustaining it. The unseen world of spirit was seamlessly interwoven with this phenomenal world so that the two were essentially experienced as a unity. The air itself was an “awesome mystery joining the human and extra-human worlds.”

She was the starry cosmos, she was the earth and all life on earth and she was the unseen dimension of the world of spirit which underlay the visible world. People felt connected to her as to a great cosmic being. Everything was infused with divinity because each and all were part of a living, breathing, connecting web of life: plants, animals, man and woman — all these were her ‘children’. The animals painted on the walls of the great Palaeolithic caves came forth from her womb and returned to it, to be born anew. Overawed by the immensity and grandeur of nature, and sensing the presence of the unseen dimension of spirit within its forms, people felt they lived within a Sacred Order, however harsh the conditions and the brevity of their lives.

The Mother, Womb and Origin of All

Whether we look to Neolithic Europe, or to India and China, or to any people that has managed to retain its ancient traditions, like the Kogi Indians of Colombia, we find the cosmos imagined as a Mother, the womb and origin of all, the bringer of life and death, holding within her being the three dimensions of sky, earth and underworld. It is her ancient presence that was transmitted to the Great Goddesses of Bronze Age Egypt, Mesopotamia, Persia and Anatolia. Further east, in China, we find her in the Goddess Kwan Yin, in Tara,

We may ask why the image of the Great Mother was so important. To answer this question, we need look no further than our experience of birth into the world. First of all, there is the experience of the embryo and foetus in the womb, the experience of union and containment within a watery, nurturing matrix. After the sudden and violent expulsion from this matrix in the traumatic experience of birth, the prolongation of the earlier feelings of close relationship, safety and trust, is absolutely vital.

Without the consistent and loving care of the mother in early childhood, the child has no trust in itself, no innate power to survive negative life experiences, no model from which to learn how to nurture and support itself and care for its children in turn. Its primary response to life is anxiety and fear. It is like a tree with no roots, easily torn up by a storm because its instincts have been traumatized. With the love of the mother and trust in her presence, the child grows in strength and confidence and delight in itself and in life. Its primary response is trust. Extrapolate this to the small, isolated communities struggling to exist in different areas of the world and it is easy to understand why the image of the Mother was so important for their survival.

The terrible Aspect of the Great Mother

The “terrible” aspect of the Great Mother is documented in almost every early mythology. The powerlessness of humanity in the face of nature’s terrifying power to destroy everything that it has built up is deeply imprinted on the memory of the race, the most feared memory being that of the Great Flood when climate change caused the oceans to rise, burying coastal settlements. Volcanic eruptions, tsunamis, devastating floods — everything that can destroy life in a few brief moments is carried in the image of nature as the “Terrible Mother” who abandons and destroys her children. Fate has always been imagined as a goddess.

I think it is possible to say that the idea of the whole cosmos as an entity with consciousness or soul, in which every aspect of life is related to every other, grew out of the mythology surrounding the image of the Great Mother and that she is also the ultimate origin of the image of the Shekinah explored in the last chapter.

Life at that time was lived in the dimension of the Mother, in participation and accord with the cosmic rhythms of her being, and this kept people in touch with their instincts and was the foundation of their fragile trust in life. We have lost the awareness that we live within a greater cosmic dimension, which, like the Great Mother, spins and weaves the extraordinary web of life through which we are connected to each other, to all life on earth and to all cosmic life.

The primordial experience of the Great Mother is the foundation of later cultures all over the world. She is like an immense tree, whose roots lie beyond the reach of our consciousness, whose branches are all the forms of life we know, and whose flowering is a potential within us, a potential that only a tiny handful of the human race has realized.
As a small child lives within the mother’s field of consciousness and draws its life from it, so we, at this time, were held in the field of the Great Mother, who drew together all orders of life in a seamless web: everything was related because all shared in the primacy of the original source.

She was the invisible patterning of orders of life whose relationships were defined and explored in ways that will be explained in the next chapter. She was experienced as an immutable Law, which the whole of life reflected and obeyed in the way it functioned, from the circumpolar movement of the stars to the behaviour of the tiniest insect.
The image of the Great Mother reflected something deeply felt — that the creative source cares for the life it has brought into being.

Between 25,000 and 3000 BC The image of the Great Mother is slowly differentiated into three specific forms related to the realms of sky, earth and underworld. As Bird-Goddess, she was the Sky and the life-bestowing water, which flowed from her breasts, the clouds. She was the Goddess of Earth and from her body were born the crops that nourished the life she generated. She was Goddess of the Underworld and the waters welling up from beneath the earth as springs, lakes and rivers. Her symbol as ruler of the Underworld was the serpent, image of her power perennially to renew life. She was also the sea on which the fragile boats of the Neolithic explorers ventured into the unknown. Whether we look to the extraordinary goddess figures of Old Europe or further East, to Mesopotamia and the Indus Valley, the basic mythology is the same. In the Bronze Age (from c. 3500 BC), she still has the same essential forms, only more defined and specific, as well as a complex mythology as the ‘Mother of All’ that would one day become the title of the Shekinah and of Eve in the Book of Genesis.

This was the phase in human evolution when rituals were devised to keep the community in harmony with her life: to propitiate her with offerings that would bring protection and increase, and ward off her power to destroy. People learned to pay attention to unusual signs or events; to look and to listen at a level beyond the routine experience of life; to notice correspondences and draw analogies, to follow their intuition and respond to their imagination.

Womb-like caves, rounded mountain tops shaped like breasts, groves of trees on the tops of hills, deep natural crevices in the earth with water gushing from them – all were sacred – worshipped as signs or manifestations of the Great Mother. They became the focus of shamanic rituals through which the shaman connected the clan or tribe with the invisible dimension of the spirit-world. Our culture has dismissed these rituals as primitive superstition, not understanding how much wisdom and knowledge, gathered over millennia of observation, was contained in them.

There are still places all over the world where pilgrimages are made to these sacred sites. Deeply buried in our psyche we carry ancient memories of the sacredness of the earth, and of the earth as Mother.

In the later Bronze Age one of the three dimensions of the Great Mother’s being was still the underworld, symbolically the cave, the tomb, the realm of the ancestral dead. There was always a guardian at the entrance to this realm — a lion or serpent or lion-headed bird which stood at the entrance to her temples. In the throne room at Knossos in Crete two magnificent griffins (part lion, part bird, part serpent) symbolizing sky, earth and underworld – the three-fold realm of the goddess – guarded the exquisitely sculpted throne where the priestess presided over the rituals which celebrated the immanent presence of the goddess.

It is from the Neolithic era that we have inherited all the images related to Great Mother as an invisible flow of energy which brings life into being, sustains and transforms it, and withdraws it into a hidden dimension for rebirth or regeneration. Rhythm is a primary characteristic of the Great Mother, reflected in the ideogram of the wavy line. The movement of the moon, sun and stars, the seasons of the earth, and water all reflect the underlying rhythm of life. All have specific rhythms which affect the rhythm of our own lives: each moment we inhale and exhale; each night we withdraw into darkness to be regenerated for a new day. Our birth and our death reflect the same rhythm.