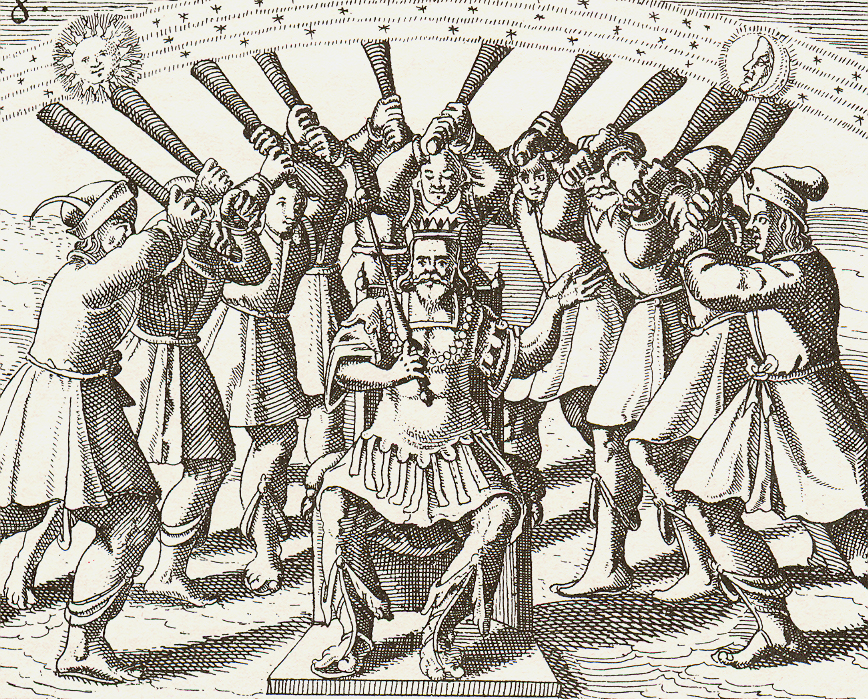 An Outworn Image of God

We are, as the historian of culture Thomas Berry comments, “in between stories. The old story, the account of how the world came to be and how we fit into it, is no longer effective. Yet we have not learned the new story.” In mythic terms, we are waiting for the rebirth of the moon and a new story which could unite the whole of humanity in a shared vision of reality.

During the phase of darkness however, we are still living under the spell of the solar meta-narrative described in Chapters Six, Nine and Fourteen—the Promethean myth of progress and the mastery of nature through the power of our science and technology. This meta-narrative has no relationship with a transcendent dimension. The human mind is the supreme value. “Progress” serves the perceived needs of our species alone. In its hubristic stance, this secular meta-narrative has banished the unknown, unexplored, transrational aspect of life and of our own nature. Yet, paradoxically, this secular meta-narrative has developed out of the belief enshrined in the Book of Genesis that God gave Adam dominion over the earth.

The great mythologist, Joseph Campbell, writes in The Inner Reaches of Outer Space that from time to time, the image of God has to die if it is not to become an idol. It has, he says, to become transparent to transcendence in order to be renewed. The same theme is reflected in the image of the death of the Old King that is found in many alchemical treatises. In our time the Old King may be identified not only with an outworn image of God but outworn beliefs— part religious, part secular—which can no longer provide an adequate container for the soul of humanity. It may be that the image of God needs to evolve because something in the old image is missing or incomplete.

It may not be God who has died but rather the image we have projected onto Him, an image that was formulated by different priesthoods according to their level of understanding at a specific historical time.

Or, to use a gardening metaphor, ‘God’ has become pot-bound, constricted by the anthropomorphic, gender-biased, paternalistic image that was projected onto Him millennia ago. Like a conjurer demonstrating his skills, we have cut God in two and have utterly lost the sense of the divinity of nature. We have fixed the image of deity in the masculine gender, refusing until very recently to entertain the idea that the feminine aspect of spirit is essential to the completion and balance of the image of deity and therefore to the balance of a civilization.

A Radically New Image of God

As Pierre Teilhard de Chardin suggested, we need to formulate a radically new image of God and a new cosmology that is related to the phenomenal discoveries of science which have revealed the vast dimensions of the universe. We also need an image of the sacred marriage that can reunify spirit and nature—the two aspects of life that were sundered by the beliefs that arose during the solar era. As Teilhard de Chardin pointed out, “Something seems to have gone wrong in the way God is represented to man. “Man would seem to have no clear picture of the God he longs to worship.”

Jung foresaw this situation in his book, Psychology and Religion, East and West. He understood that Nietzsche’s phrase “the Death of God” was not to be taken literally, any more than the doctrines of the Church about the Virgin Birth and the bodily Resurrection of Christ were to be taken literally, but described a profound transformation that was at work in the depths of the modern psyche. Addressing the need for the emergence of the Christian myth in a new form, and offering a new mythical and symbolic interpretation of Christ’s death and resurrection, he wrote,

The myth says he [Christ] was not to be found where his body was laid. “Body” means the outward, visible form, the erstwhile but ephemeral setting for the highest value. The myth further says that the value rose again in a miraculous manner transformed. The three days’ descent into hell during death describes the sinking of the vanished value into the unconscious, where, by conquering the power of darkness, it establishes a new order, and then rises up to heaven again, that is, attains supreme clarity of consciousness. The fact that only a few people see the Risen One means that no small difficulties stand in the way of finding and recognizing the transformed value.

As Jesus pointed out two thousand years ago, bottles become worn out and have to be replaced. But how do we create the vessel which can assimilate the wine of a new vision of reality and a different image of God? How do we relinquish the dogmatic beliefs and certainties which have, over the millennia of the patriarchal era, caused indescribable and quite unnecessary suffering and the sacrifice of countless millions of lives? I cannot answer these questions. But I do know that as the new wine comes into being, we have to hold the tension between the old and the new.

It must have been like this two thousand years ago when the disciples of Jesus tried to assimilate what he was telling them, something so utterly different from the belief-system and the brutal values that governed the world of their time. Those new teachings and those different values seem barely to have touched the consciousness that currently governs the world, however much political and religious leaders proclaim their allegiance to them. Millions claim to be Christians yet those same millions subvert the teaching of Christ about compassion and not shedding their brothers’ blood. Christianity seems to have degenerated into feuding between its different branches over such issues as homosexuality and women priests.

Much of what was lost to Christianity during the early centuries of persecution has been recovered, including the important Gnostic texts discovered in 1945 at Nag Hammadi in Egypt. But there is as yet no cultural vessel to receive this recovered material, no way in which it can be integrated or married with the orthodox religious traditions because these cling tenaciously and even fanatically to the literal interpretation of the ‘old bottles’, the revelatory texts written down millennia ago.

We now know why the feminine dimension of the divine was repudiated by the three patriarchal religions but it does seem astonishing that they do not appear to question the concept or image of God they have inherited from the past. As Susanne Schaup points out in her book Sophia, Aspects of the Divine Feminine:

The image of God in Western religion, including Judaism and Islam, is a masculine one, despite all protests to the contrary, and as such is a direct cause of the devaluation of the Feminine and feminine priorities in our culture…That which gives a culture legitimacy is, ultimately, its underlying concept of God. If this concept does not change, nothing can actually change…No scientific, ecological, or social paradigm shift can take effect, as long as the theological paradigm does not change along with it.

Despite the efforts of many feminists to ‘marry’ a feminine image of deity with the masculine one and the world-wide change of consciousness that is gathering momentum with regard to our relationship with the planet, it is nevertheless a fact that the world is still ruled by a patriarchal mindset. The great nations of the world are still competing with each other for power and resources rather than coming together to serve the endangered planetary organism. There is as yet no political consensus about how to work together and how to formulate different values, although a movement in that direction is growing and becoming increasingly articulate.

While the “death of God” has been welcomed by a secular culture, this fact nevertheless creates in many people an unconscious anxiety and a deep fear of the void, and gives rise to a moral vacuum as well as to a defensive fundamentalist position in both religion and secular science. The Jihadist who believes that it is God’s will that Islam should conquer the world may draw the power of his ideology from this fear, as may Christian Fundamentalists. The roots of the tendency to polarize lie deep in our solar past but they are strengthened whenever there is a situation which arouses uncertainty, anxiety and conflict.